‘The Story of the Fountain’ in Gees Secret Garden

Once upon a time, Jacqui, our longstanding head gardener for ‘The Oxford Collection’, suggested we should have a water feature on the new terrace of the Secret Garden which we were creating at the new Gees in the Banbury Road, Oxford. The seed was well and truly sown in my mind and I knew it had to be some sort of fountain.

First stop was a lead hopper, spout and down pipe dating back to 1793, which had lingered in our store for the last thirty years waiting for the right location.

Second stop was a chance visit to Lassco’s treasure trove of reclaimed and salvaged objects at their Three Pigeons depot at Milton Common outside Oxford. Anthony and Tom who run the place, showed me an amazing stone semi-circular scallop shell. It is truly huge and weighs two tons. Lo and behold, the semi-circular shape at the top of lead hopper fitted exactly in the base of the scallop. A marriage made in heaven. Obviously with some divine guidance, the fountain was beginning to form itself before my very eyes. The demi-lune stone originally came from Old Broad Street, City of London: The Indemnity Marine Assurance Company Building. 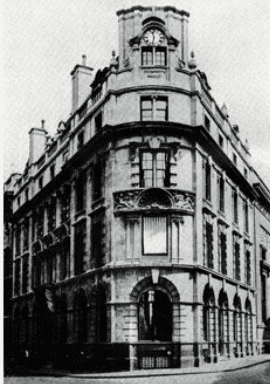 Next, a visit to my favourite salvage yard just outside Gloucester to meet two long standing friends Ron and David, of Ronsons Reclamation, another treasure trove of architectural features and antiques. Together we selected the final supports and stone block backdrop for the evolving fountain and retaining wall.

The last piece of this weird jigsaw which has a mind of its own, was to find a stone trough for the water spout to spill into. Ron’s son, Darren of Lichen Antiques, had the perfect size and shape.

When we reveal the centre piece of our Secret Garden to the outside world in May, you will be able to make the acquaintance of our personal tribute to Ukraine, namely four beautiful goldfish in their new home. They are called Zelensky, Kyiv, Mariupol and Freedom.

Manage Cookie Consent
To provide the best experiences, we use technologies like cookies to store and/or access device information. Consenting to these technologies will allow us to process data such as browsing behaviour or unique IDs on this site. Not consenting or withdrawing consent, may adversely affect certain features and functions.
Manage options Manage services Manage vendors Read more about these purposes
View preferences
{title} {title} {title}